Tech Company Relocations to the Tampa Bay Soar in 2021 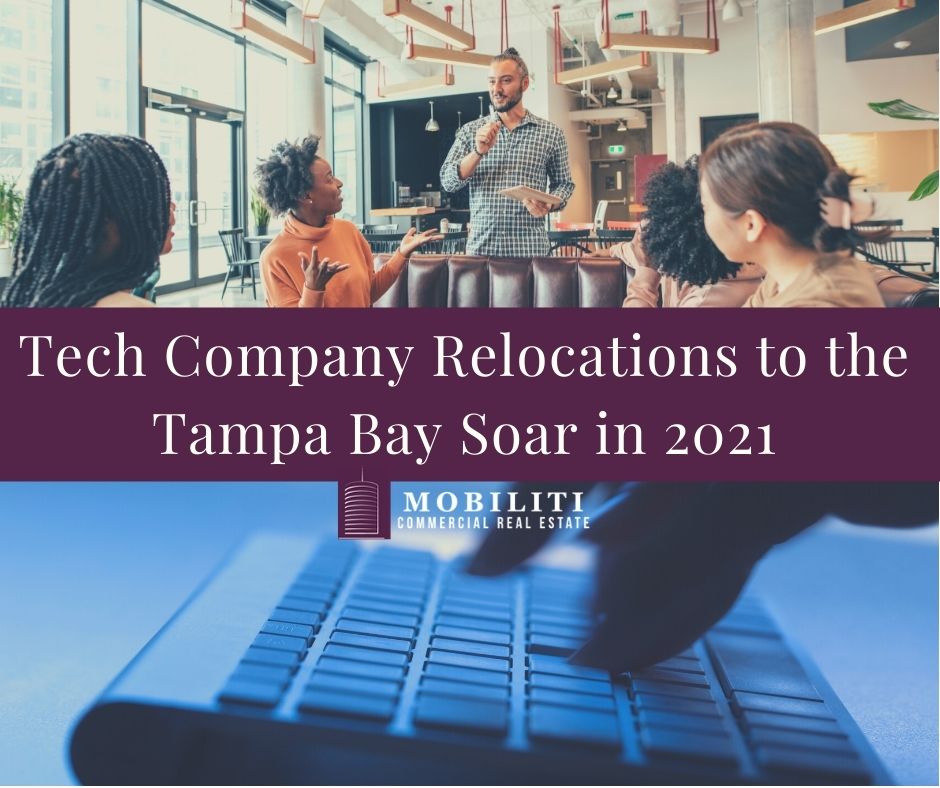 At a time when states like California and New York are seeing more move-outs than move-ins, approximately 1,000 people a day continue to move to Florida.  With the ability to work from anywhere during the pandemic, some came to Florida to escape dense urban environments, stricter Covid restrictions as well as to take advantage of Florida’s pleasant winter weather.  It appears that after having spent the winter in Tampa Bay, some execs decided not only to relocate their families but also their companies.  Aside from jobs, these move-ins will have a positive impact on Tampa Bay’s office market.

Of the companies mentioned below, Pfizer, ID.me, CrossBorder Solutions, Signode and QuoteWizard Insurance have each leased large blocks of office space.  The following is a list of companies that have either relocated their headquarters or opened a new office in Tampa Bay in 2021 together with comments from company execs as to why they relocated or opened new offices.

Pfizer opened a large operations hub in Tampa and, based on the amount of office space leased (100,000 Square feet), it is estimated that Pfizer may be hiring as many as 600 people locally.  Tampa was attractive in part because of the presence of a large and diverse talent pool, a precedent of similar life science operations in the area (Bristol Myers Squib, Johnson & Johnson and Amgen) and an attractive quality of life.

CodeBoxx, a company that trains software developers, relocated its headquarters from Quebec City to St Petersburg.  For Codeboxx, St. Petersburg was a logical choice based on a sense of community, shared values and common beliefs.

Suzuki Marine USA, a division of Suzuki Motor of America selected Westchase for its new headquarters beating out Orlando, St. Augustine and Atlanta.  The Westchase location was selected based on proximity to Suzuki Marine’s Panama City technical and testing facility, proximity to Tampa International Airport, and proximity to dealers and boat builders.

TrustLayer, an insurtech startup backed in part by Jeff Vinik moved its headquarters from San Francisco to Tampa.  Its founders looked at Austin but picked Tampa given the growing number of insurance companies in the area and the local talent.

Procoto, a software-as-a-service company moved to Tampa from Atlanta.  Proximity to the beaches and the startup climate were important considerations.

Signode, a $2 billion transit packaging company is relocating its corporate headquarters from Chicago to Tampa.  Signode expects to bring 200 jobs to the area.  Tampa was selected based on its attractive cost of living, climate, and abundant cultural and recreational options.

Virginia-based tech company ID.me is opening a second office in Tampa and expects to hire at least 500 people before year-end.  Tampa beat out Jacksonville, Provo, Utah, and Greenville South Carolina largely based on the friendliness of the people, business climate, talent and proximity to the ocean.

Toronto-based tech company RabbitRun relocated its headquarters to St Petersburg largely because of the telecom and tech activity happening in Florida and to be near their customers.  RabbitRun plans to hire 25 new employees by year-end.

While Miami’s Mayor Suarez seems to be grabbing most of the national headlines for his tech recruiting efforts, you can see from the list of companies above that Tampa Bay is doing an excellent job in attracting tech companies.  In its Cyberstates 2021 report The Computing Technology Industry Association (Comp TIA), Tampa Bay ranked 22nd in the Nation for net tech employment behind Miami (19th) and Orlando (20th).  With billionaire Jeff Vinik as Tampa Bay’s number one cheerleader and tech investor, we may soon see those rankings shift in Tampa Bay’s favor.

At Mobiliti CRE we focus 100% on representing commercial tenants with site selection, office relocations, expansions, contractions, and subleases throughout Tampa Bay and the entire West Coast of Florida.  We also assist businesses that are looking to purchase office, medical office, industrial, and retail space.  Reach out to us for assistance with all of your commercial real estate needs at (813)-300-2227 or email pam@mobiliticre.com