What is a Letter of intent and Why Are They Useful? 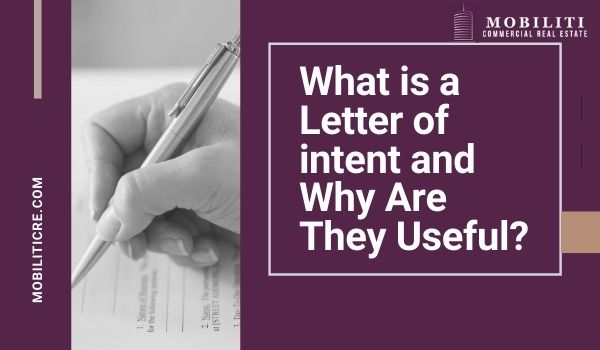 No one wants to waste time and money on a commercial real estate transaction that the parties will never complete. A well-drafted, nonbinding letter of intent (LOI) can be a valuable first step in determining whether there is a deal to be made before too much expense has been incurred.

What is a Letter of Intent (LOI)?

A letter of intent is a letter from one party to the other, countersigned by the addressee. Unless it clearly states otherwise, it may constitute a binding agreement despite its informal appearance.

The purpose of an LOI is to outline the key terms of an existing or proposed agreement such as a commercial real estate lease or real estate purchase agreement. The use of an LOI implies that, while the parties may intend to reach an agreement in the future, they have not done so yet.

Despite any implication of the document’s title, every LOI should expressly provide whether and to what extent the parties intend it to be binding. If your LOI doesn’t do that, then you are asking for trouble.

Why use an LOI?

LOIs can save both time and money in connection with complex transactions such as commercial real estate leases and real estate purchase and sale agreements where the documentation will be extensive. Reaching agreement on all key terms to the proposed transaction before generating massive amounts of paperwork is a wise and worthwhile step. The LOI can bring to the surface major issues that must be dealt with, and if there is an insurmountable obstacle, it is better to discover it sooner rather than later.

Non-lawyer negotiators who are provided with a good standardized form of LOI may reach an agreement on the business and economic aspects even when the transaction has legal ramifications. As long as the LOI is clearly nonbinding, the legal review may wait until the preparation of the final documents.

Of course, there are exceptions when the use of an LOI may be inappropriate.  In transactions involving significant tax or regulatory matters, or in any case where litigation is pending or threatened, the key negotiators may want to have their lawyers present from the beginning. On the other hand, the LOI is a waste of time if the transaction is routine and simple, especially if one party can dictate the terms.

Related: What’s the difference between triple net and gross lease?

Each Letter of Intent varies with the particular transaction, but the following terms are common in most of them.

The proper use of carefully considered LOIs in appropriate transactions will reduce your risk of failure, increase your likelihood of success, and save time and money.

At Mobiliti CRE we focus 100% on representing tenants with office relocations, expansions, contractions, and subleases throughout Tampa Bay and the entire West Coast of Florida.  We also assist businesses that are looking to purchase office, medical office, industrial, and retail space.  Reach out to us for assistance with all of your Tampa Bay commercial real estate needs at (813)-300-2227 or email us at pam@mobiliticre.com